TPP: Clarity on the U.S. Timelime

I verbally described the timeline for U.S. ratification of the Trans Pacific Partnership in an earlier post. The Trade Promotion Authority bill that was passed last June lays out the requirements, but is not easy to follow. So I was pleased to see a graphical timeline done by Business Forward in Washington, DC. I asked for and received permission to use it in the TPP work of the Hawaii Pacific Export Council. 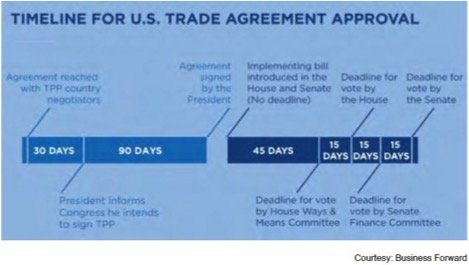 For those following along at home, President Obama notified Congress on November 5 that he intends to sign the TPP agreement within ninety days. That means he will likely affix his signature sometime in February. Implementing legislation is being feverishly drafted, but there is no deadline for when it can be submitted to Congress. And once it is submitted, the timeline switches from calendar days to legislative days. The House of Representatives actually meets for remarkably few days in an election year, so my guess is that the implementing legislation will be timed for a vote late in 2016 – after Election Day. But that’s just a guess.

Steve Craven advises companies on international business strategies and how to overcome problems encountered in foreign markets. He is a former consultant, American diplomat and a U.S. trade negotiator. He served as a Career Diplomat and Senior Foreign Service Officer, member of the U.S. Commercial Service, U.S. Department of Commerce. Mr. Craven also previously served as Chair of the Hawaii Pacific Export Council.

Are you thinking about starting a business of your own? Starting a business is an exciting proposition, but it’s also an incredibly challenging undertaking. These resources will help you learn about what it takes to start a business.

Plan ahead by learning about export documents, what you need to know and how to leverage them.

Putting the pieces together…

Explore a host of opportunities and resources available at your fingertips.